I’ve split the previous post, so that it now contains only the thoughts about the picture. Now here’s the creation process for the image “Sealing Maedhros’ fate”.

The sketch was made in Photoshop. I like sketching digitally; it allows me to move around people or groups of people, flip images to check the averse effect, and anatomy errors are corrected far more easily. I’d actually moved to Photoshop with this piece after trying to sketch on the pastel paper directly, but that’s some unforgiving paper. It turned out such a large mass of people was too ambitious a project to do on pastel paper directly. So I decided to do the lineart on normal drawing board and print it onto pastel paper later. (I have an A3 printer I couldn’t do without anymore!) 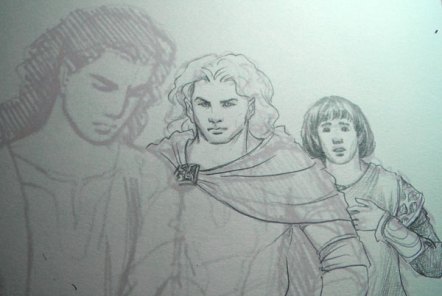 The next stage was a clean lineart. As usual, I printed out the digital sketch above on A4 drawing board – faintly in pink – and then drew the lineart over it. The lineart is later scanned, and the pinkish sketch filtered out in Photoshop using Ctrl+U.

In the process, Curufin got the

best redesign this character has ever had – actually, a side effect of a redesign of Fëanor I’d been planning all along. It was time to move away from the Prince Valiant haircut. I allowed the Twins to keep that.(Interestingly, the two “recent” Curufin pics – a commission and a collab with Anke Kathrin Eißmann – had Curufin long haired because we’d agreed on that.)

This new look is inspired by British actor Stephen Billington – he had a minor role in Braveheart (famed for being thrown out of a window by Edward the First) and he looked perfect.

Curufin narrowly avoided another redesign, when my four-year-old daughter looked over my shoulder while  was drawing, wanting to know who everyone was and what they were doing. I was just drawing Curufin’s sleeve when I asked her. “Any idea for a pattern I could use there?”

She thought for a moment, then, “Rabbits.”

I did debate putting in some rabbits as a joke, but then decided that it would effectively have ruined the image. XD

Doing the lineart on drawing board rather than pastel paper has another nice effect – the lines are far smoother and the detail works much, much better. The shading, on the other hand, looks much nicer on the rougher paper, so I then printed out my lineart to some A3 size pastel paper, and started shading.

And what a wonderful excuse to go overboard again with Elven clothing designs.

Here you see the finished Amras and Celegorm on the right, and a half-shaded Maglor on the left

That dark blotch over Curufin’s head is hairspray. The best fixative there is. Usually. Maybe I just scanned too soon.

For the finished pic, I used the gouache mainly and most strongly on Maglor (the front figure), to avoid having too many brights tearing the picture apart. Finished image is at the top of this post. :)