The Oath of Fëanor – early stages

Then Fëanor swore a terrible oath. His seven sons leapt straightway to his side and took the selfsame vow together, and red as blood shone their drawn swords in the glare of the torches.

J. R. R. Tolkien, The Silmarillion, Chapter 9: Of the Flight of the Noldor

What artist can read these lines without jumping up from the book and darting for the drawing table? I’ve never seen one that really captured what I thought it to look like. As you can imagine, I wanted to show the sons individually, and get a glimpse of what some of them thought about the Oath. Can you image Maglor taking the Oath without the slightest hint of unease? Neither can I.

In 1995, I thought I could pull it off. Hey, I was the greatest artist in the world! All shall love me and despair!

Let us be glad there was no Internet in 1995. Or I’d have found more despair than love. Especially for Maedhros’ mint-green tights. And I would have earned every jot of it.

(There was also no “Peoples of Middle-earth”, so I still thought Amras and Amrod had dark hair.)

After that, I didn’t try again. I’d decided that this scene, as visually compelling as it was, was unpaintable. Mostly because of the question how to get eight people and their drawn swords into one picture without ending up with… that. Over the years, there was this itch to try again… quickly evaporating every time I actually doodled some sketches and hit the same old road blocks.

The next attempt came last autumn, when my first approach was something like this. 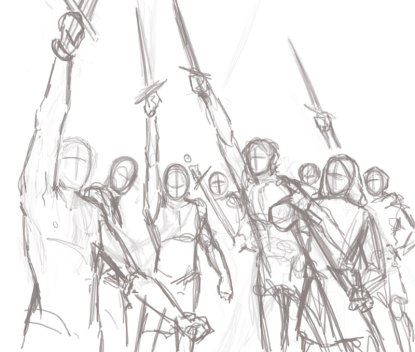 Then a user from Comicforum.de convinced me that worm’s eye view was the way to go on this. Which scared me stiff, to say the least. I’m very severely perspectively challenged. Ask my parking skills. 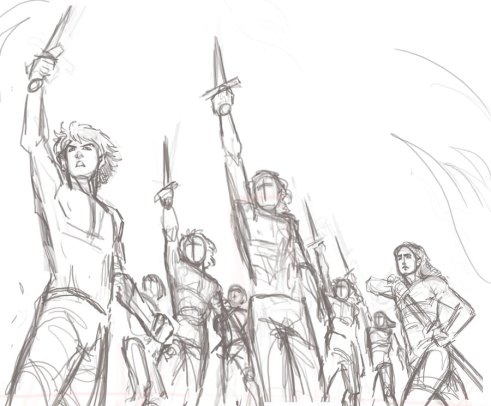 I hit another road block then – I couldn’t get the perspective to work at all. I just couldn’t see it.

Then came our school fair… then came our move to the new house… then came just too much to take care of… the Oath slept again. (Just as in real life. Wait, did I just say that?)

So, over Carnival, I finally dug it out again.

(Carnival, for the non-Germans among you, is a time when Germans mostly along the Rhine suddenly dress up as clowns and cowgirls, spend Thursday to Tuesday in a drunken stupor which nonetheless still allows them to bawl songs with lyrics about coughing earthworms and red horses, and sit in “sessions” where overweight old men in ridiculous hats read out speeches in their local dialects, which aren’t even funny if you actually understand what they say. The only good thing is that it would be absolutely irresponsible to open the schools for those days, so we get a week off, which I usually spend locking and barricading myself inside and drawing for four days non-stop.)

I played around with the previous one unsuccesfully – and finally ended up making reference photos.

These are actually not even half of them.

The artist must be both an actor… and absolutely devoid of all vanity. Now who’d have thought that something that looked so Dancing Queen would be fitting for the Oath of Fëanor?

The room did the trick. Even though my picture has no walls, I could now envision them in relation.

I’m endeavouring to do this one in watercolour, possibly with gouache. Somewhat more solid and a lot more dramatic than what I usually do. If I pull this off, I can’t tell you how happy that’ll make me.

12 thoughts on “The Oath of Fëanor – early stages”