I figured I might just as well detail my process of cleaning lineart, since people keep asking how I do it.

As you know, I often sketch digitally, especially for more complicated scenes, and then print out my sketch in a very light, very saturated colour onto Bristol board. Then I use those messy coloured lines as guidelines and draw my clean lineart in pencil (H mechanical pencil, 0.5 size) on top of them, sometimes deviating more, sometimes less. Here, I changed the entire pose to something less stiff.

The lineart is then scanned (in three parts, as I was working in A3), reassembled, and looks like this. The rest of the cleanup job will be conducted by my trusty old friend, Photoshop 6.0. What were you saying? Outdated how? Speak up, sonny! 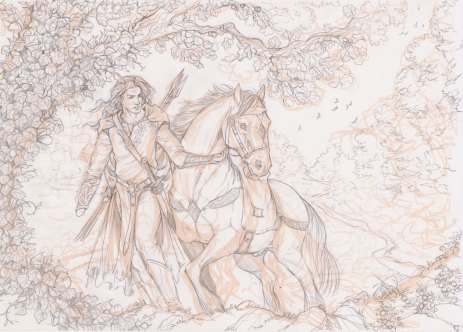 To get rid of the orange lines, I then open the colour adjustment window using Ctrl+U. I select “red” and then “yellow” in the top rolldown menu, and slide the bar that adjusts the brightness all the way to the right for both.

See – all the orange is gone.

I’ve tried using other colours for the underlaying sketch – cyan for a time, or yellow, but usually, you have two tones you need to filter out. But that’s just a mouseclick. I like orange because it’s great to filter out (better than magenta/pink which usually leaves a greyish rest), and great to work with while I’m drawing on it. Yellow is also great to filter out, but hard to see while doing the lineart!

Then I adjust the contrast using Ctrl+L, and use the burn tool to get rid of smudgy areas I want white in the final lineart.

Sometimes, I also tweak the lines to correct mistakes or just try around in areas that don’t fully satisfy me. Here, I changed Maedhros’ face a bit.

Lastly, I tint the lineart (again using the Ctrl-u function), usually to something in the red to blue range. When I print it out later to be watercoloured, I leave the tint in place, as a slightly coloured lineart results in a more dynamic colouring.

Printing my lineart on watercolour paper is something I’ve done for a long time now. It can be a failsafe against botched watercolour attempts or dirty-water accidents (though that probably doesn’t happen more than once a year). Mainly, I do it as it allows me to develop a very detailed lineart on smooth drawing paper, something that watercolour paper just doesn’t allow to this degree. 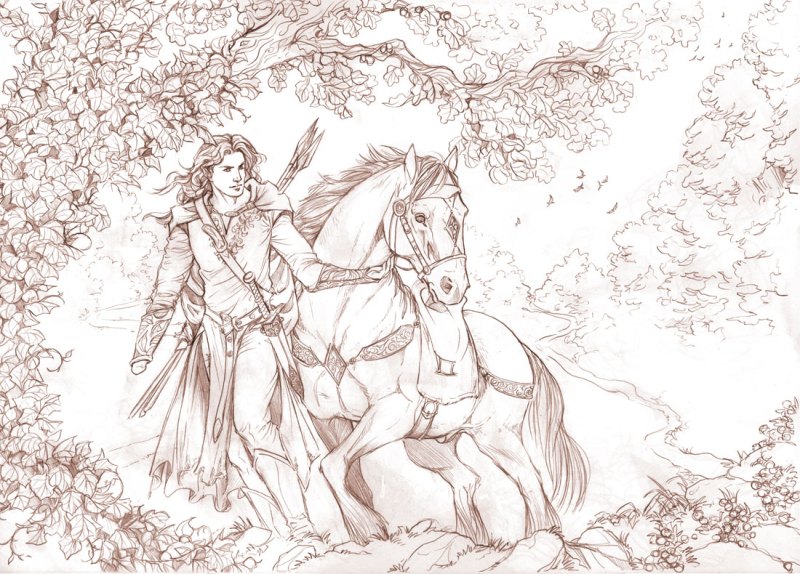