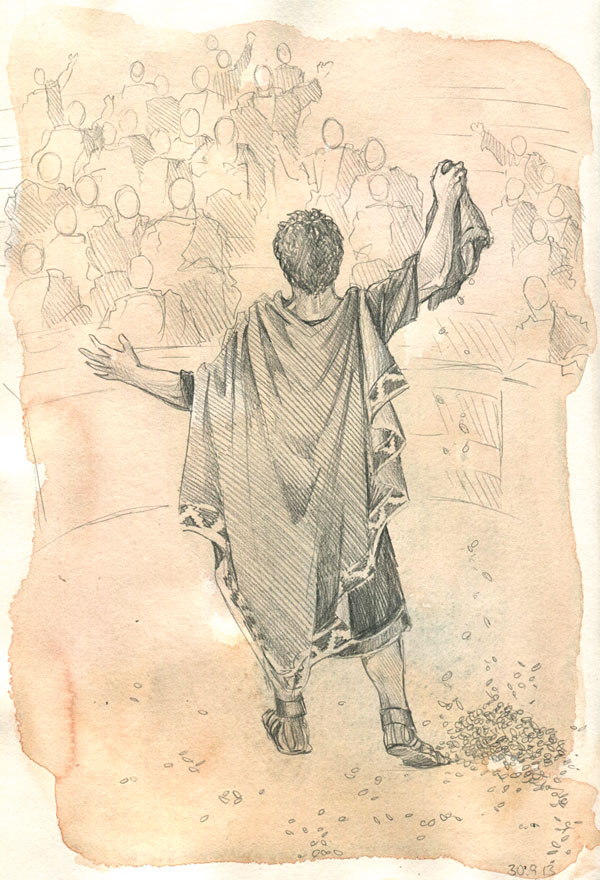 Livy reports that, after the Battle of Cannae, Hannibal’s brother Mago was sent home to Carthage to report of his brother’s great victory, pouring out “three pecks and half” of gold rings on the floor of the Carthaginian council. These rings had been taken from knights and senators who had fallen in the Battle of Cannae.

(Long historical rambling following. I had this thought today, and I don’t think I’ve ever heard it voiced, so I need to pin it down before I forget it).

Usually, this gesture is seen as nothing but “Look at my bro’s awesomeness!” and its flourish is well enough in keeping with what we know of Hannibal’s general conduct, so that was most likely the overture. Mago then proceeds to demand support (money, grain and reinforcements) for his brother.

I actually think that the rings episode was one of Hannibal’s more brilliant ideas, and if anything could have worked, it was this. Alas, it didn’t, as so many other things after that time.

Why do I think there was more to it than a joyful victory report and a mandatory plea for reinforcements that was never implemented in a way that actually made a difference for the war?

Firstly, Livy says Hannibal did not send Mago straight away. The reason he gives is that some peoples in Italy had declared for Hannibal during that time, but there’s something else, something incredibly important, that happened in that time. Hannibal’s envoy he’d sent to Rome for negotiations was denied entry to the city. This must have been the instant in which Hannibal realised that his entire concept of the war threatened to collapse in itself. According to every rule of war in the Hellenistic world, Rome should have capitulated. It did not.

Secondly, Hannibal sent Mago. Perhaps his closest confidant after Maharbal. Granted, he couldn’t have known that Mago would never join him in Italy again; that the council would send him to Spain where he would never do much good. But the fact that it was Mago makes it clear that Hannibal wasn’t just reporting home. Mago had something important to say, something that Livy, in the speech he puts in Mago’s mouth, doesn’t record, but it’s highly likely that it was these three main points.

(I) My bro is awesome. Yes, there’s no way around that.

(II) These are the rings of senators. Old men in their fifties, who, as opposed to you, don’t sit in a council and debate on how many men to send where, who actually get on their horses or stand in ranks in a bloody field and die in their dozens.

(III) This is what we’re up against. We’re up against a nation whose very leaders bleed and die on the battlefields. A nation that, after its entire army has been annihilated. closes its city gates to peace talks. A nation that will not surrender unless it is crushed even more decisively than it already has.

And this is the point where we can’t really find fault with Carthage, or with Hannibal. Hannibal had played his hand. He saw affairs rather plainly. He might still hope to bring over Rome’s associates, and it’s highly likely that his successes in that regard fooled him and Carthage into believing it might be enough. But he knew that this Rome would not surrender in one battle. Had Carthage sent more men, it’s even possible he might have attempted a siege. But we can’t really fault Carthage for not sending as many as Hannibal would have needed (we’re talking at least another fifty to seventy thousand). Carthage could never have matched the insane numbers of soldiers that Rome sent into the field, and Carthage must have thought the very idea of it was completely insane, and that it had to be possible to win the war in another way.

Later, after the war, Hannibal’s political opponents put him on trial for not attacking Rome itself, and thereby losing the war. Hannibal defended himself by saying that Carthage itself had brought about its defeat by not sending him enough reinforcements. Both sides have been criticised – the council for leaving Hannibal hanging through ignorance or malice; Hannibal for originating such a stab-in-the-back-legend. The truth is that both acted as they had to. Hannibal probably had a clearer idea of the threat Rome posed – and its nature – than any of his contemporaries, while it would have been impossible for Carthage to grasp this idea. And even if they did grasp it, who can fault them for not resorting to the same means that their Roman counterparts employed?

Hannibal had been brought up far from Carthage, on his father’s Iberian campaigns. War was second nature to him, much more than to most other Carthaginians, and much more than any of the men sitting in council. In that, he probably understood Rome better than most of his fellow citizens. And he probably also understood this too – that he would not be able to make his fellow citizens see this, and act on his understanding.