High time to make an official “Cannae” post! The book has been finished for about a month, and is available through the website. 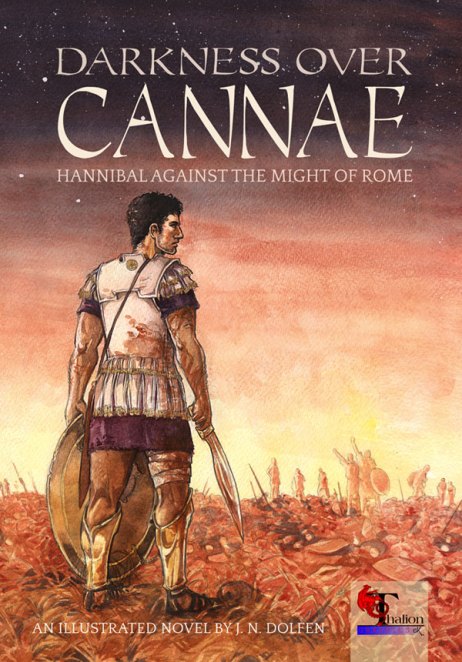 And of course, the question that everyone’s been asking: What next?

The short answer: I don’t know.

The long answer: I want to do something like this again. Wherein “something like this” is a loose way to put it. Right now, I am divided in totally equal parts between the crossing of the Alps, the fall of Carthage, the Numidian rebel Tacfarinas, and the story of Blodeuwedd and Llew Llyn Gaffes.

As I said… loosely put! ;) Time will tell. First, I need to get the “Cannae” booklet done; then we’ll know more…

It’s a GO! Darkness over Cannae on Indiegogo!

Now’s the time! Help me get this book out there! Head over to Indiegogo and preorder the book, support the campaign, be part of the project!

Work on “Darkness over Cannae” is in full swing. I haven’t been this deliriously happy with anything I have done in… decades?!

Not from “Cannae”: Hannibal, wounded during the siege of Saguntum. 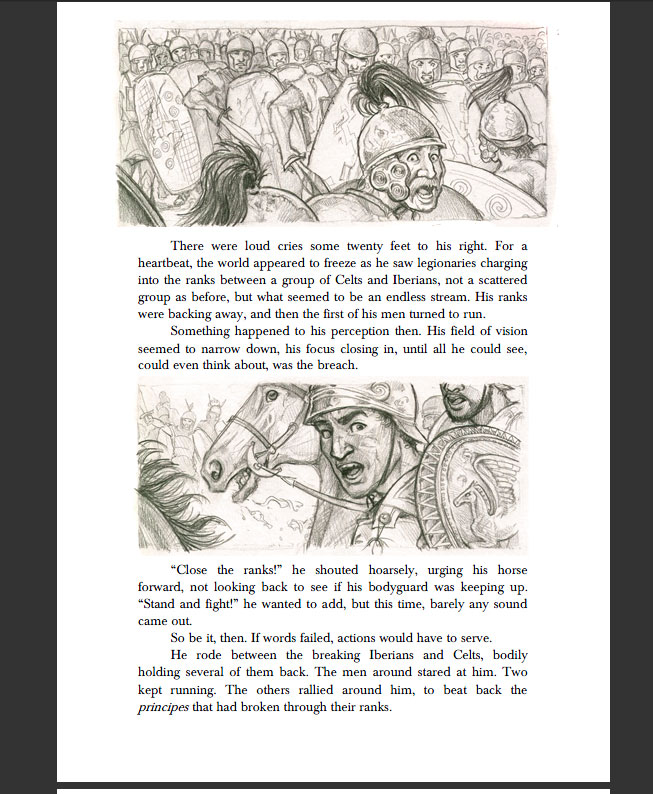 Head over to DarknessOverCannae.com to see the website I’ve put together for the new project! It’s like a tie-in appendix for the upcoming novel, with loads of goodies, artwork (more to come), and all sorts of thoughts concerning the Battle of Cannae.

Darkness over Cannae – some impressions

Work on “Darkness over Cannae” is well underway. I now know it’ll be an illustrated novel – a bit like Neil Gaiman’s Stardust in form (highly recommended, by the way!) – of probably around 120-150 pages.

It’s all set on this one fateful day – August 2nd, 216 BC – spanning an hour before dawn to a few hours after sunset, from the perspectives of six men, three Roman and three Carthaginian.

I’ve been doing some sketching, but the more finalised images and of course, greater portions of the text will not be online until the thing is done. Until then, here’s some impressions! 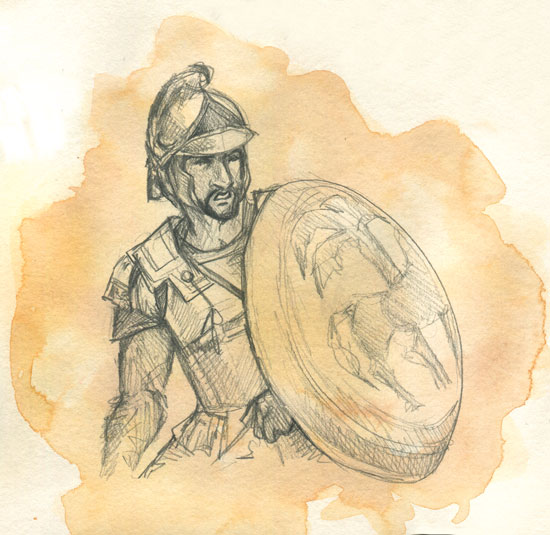 Maharbal, Hannibal’s second in command. Quick sketch with a splash of watercolour.

Top: Hasdrubal, commander of the Punic heavy cavalry. Writing him is an almost indecent amount of fun due to his wry sense of humour. Bottom: Bomilkar, captain of Hannibal’s bodyguard.

“Either Varro is smart – and conservative – enough to keep his line close together, which enables us to envelope him on the wings. Or he’s innovative – and dumb – enough to deploy in a long line to encircle us; in which case we’re more likely to break through his centre as it bumbles along than he is to break through ours. We’ll see. For the moment, however, we’ll assume he is smart and conservative, and the original plan remains the same as ever, in its main points.” Hannibal positioned the six Roman infantry rectangles as a neat, solid line with spaces between the blocks, then looked at each of the men assembled in turn and went on, sombrely, “At the risk of boring you into a stupor, here are the details again. If you want to, sing along; it can’t hurt.”

“It will, if I do,” Hasdrubal growled. Hanno chuckled; Mago snorted.

Top: After the battle, Hannibal kneels at the Aufidus, cleansing himself before praying. Bottom: Aemilius Paullus and Terentius Varro, the ill-fated consuls at Cannae.

“Terentius.” Paullus hastened after him, holding his colleague by the arm, speaking in a low voice. “Let us not fight on the right bank, at least. It favours his cavalry too much.”

“In a place where we know he can’t stage an ambush, and that we have controlled for about a week before he gets there!” Paullus answered between his teeth. “He has been here for weeks! What do you think he has been doing?”

“Such a situation will never happen!” Varro’s face was red with contained anger. “We cannot force him to fight. That much is clear. The gods know why he even wants to fight here, outnumbered as he is! We need to take this chance, and beat him now, before he can come to his senses! Aemilius, why won’t you see it – Hannibal has finally made a mistake. We finally have him where we want him, and we can finally end this. And by Jupiter Stator, I will. It’s the great deeds and courage of our ancestors that have made Rome great. Not hesitating, not hiding, and certainly not bickering!”

First ink test. Not exactly what I wanted – too clean.

Servilius Geminus was dead, hacked to pieces by several Iberian swords at once. Furius Bibaculus was dying, run through with a spear. The legates’ bodyguards were just being cut down along with them. Lentulus had drifted into view and out again, shouting at him, but the words had made no sense. Claudius Centho was dead, defending the consul, who was in a state of shock and utter disbelief.

Aemilius Paullus had left the dying right flank, only to die in the centre.

Cannae: Aemilius Paullus and the end

“Servilius Geminus was dead, hacked to pieces by several Iberian swords at once. Minucius Rufus was dying, run through with a spear. The legates’ bodyguards were just being cut down along with them. Centho was dead, defending the consul, who was in a state of shock and utter disbelief. Lentulus had drifted into view and out again, shouting at him, but the words had made no sense.

Aemilius Paullus had left the dying right flank, only to die in the centre.”

Part of a new personal project of mine I’m working on in between commishs. It’ll be a while, but… stay tuned. ^^