The Force, it’s calling to you.

So I’ve fallen in love with Star Wars again, and the more I think about it, the more I know why that is. (Scroll down for the art if you’re not into rambling.)

Last week, I dug into my old diaries and found what I wrote when I first saw Episode 1. I was surprised to read myself gushing over a movie that is today considered as bad as they get. I even loved Jar Jar Binks. But even then, I wrote that I loved it all because it was so bad. Literally. I’d been prepared to love it all and when it turned out to be silly, I told myself I loved it for the trash factor. Back then, I was okay with that.

Now, after seeing The Force Awakens twice, I’m only slowly understanding how much the prequels let me down, and how much Episode VII lives up to its very first sentence spoken: “This will begin to set things right”.

Yes, the obvious plot parallels to IV and V bothered me after the first viewing. Not so much after the second. JJ Abrams felt sure Star Wars needed a reboot, and I think it worked fine. My only qualm remains Starkiller Base, but I can apply my Episode 1 practice here and like it because it’s just so ridiculous.

What I love more and more is the characters. Those characters! I can’t even decide which I love most.

JJ Abrams gave us a female protagonist whose gender isn’t even an issue, as well as a black hero whose skin colour is never even mentioned. (It reminds me of the novels of David Weber, where skin colour and gender are totally secondary.) He gave us a daredevil pilot who is kind and likeable instead of selfish and badass. He gave us a villain that is so much your typical entitled manchild that teenagers hate him and adults love him for being such a complex figure. 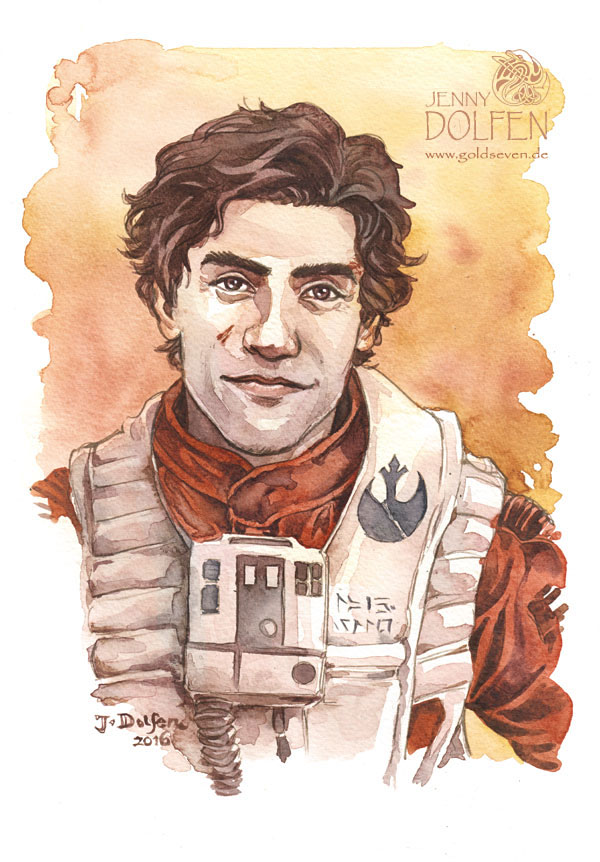 How can you not love Poe? I’m hoping the rewrite of Episode VIII will enlarge his role.

Video of the painting process is here.

You can buy the original painting here.

I didn’t fall in love with Kylo Ren until really late in the day, but as you’ll have noticed, fall in love I did. I can’t wait to find out what turned him to the dark side, and whether anything might turn him back to the light. I’m also semi-guiltily digging through Youtube to locate anything with Adam Driver in it. I can’t believe how versatile he is.

You can buy the original painting here. 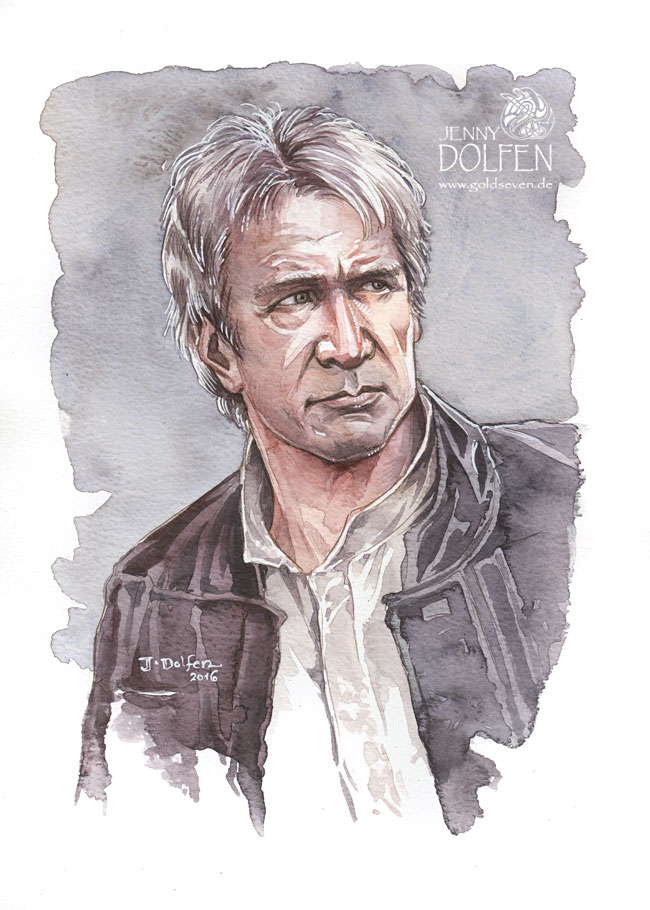 I never really liked Han in the original trilogy. “I happen to like nice men”, and as opposed to Leia, Han never managed to convince me he was one. But in this film, he breaks my heart. He started out as a cocksure smuggler who hadn’t even realised he’d lost his way; he found a terrific girl, found purpose, and ended up losing purpose, and the girl, and his way, as well as their son. The Force Awakens gives us what Han Solo “used to be” and tries to be again, but too many things have happened to be that person again. The Force Awakens is so psychologically astute and I connect with it on so many levels, and I keep discovering new ones.

If you like these (or my other work, to which I’ll no doubt return to, in case you were beginning to worry) – please consider supporting me on Patreon! Early access, special deals in my Etsy shop, digital and physical content, and a chance to win commissions and other goodies!