TL;DR: You can now buy the hardcover directly from me, with a white G printed mistakenly across the cover. Sketch copies will take slightly longer – but I’m on them!

Oloris is shipping out the books (the softcover versions) to pre-order buyers, and it’s available from their website now. A lot of people have already received theirs.

The plan was to ship 120 books to me – some author’s copies, about 20 for the sketch book preorders that I was going to sketch in and ship to the buyers, and the rest to sell in my Etsy shop.

Unfortunately, that shipment was totally destroyed in transit. It wasn’t shipped by Oloris but by the printer they worked with, who packed them without any protection whatsoever, just plonked 30 heavy, bendy softcovers into boxes that just couldn’t hold them. The boxes came apart, and DHL repacked them, but the damage was done (and got worse because DHL’s boxes were bigger, so they could just flop around in there to their little hearts’ content). I was devastated, and thoroughly disinclined to trust the company with another shipment, so I told Oloris I wanted to have the books printed here in Germany. They made some size adjustments to make it fit European standard formats, sent me the files, and I had 120 copies printed last week – in hardcover.

They arrived today – and my delight by the wonderful print quality was soon shot to pieces by a large, white letter G planted in the middle of the cover, on Maglor’s sleeve, right over his harp string. 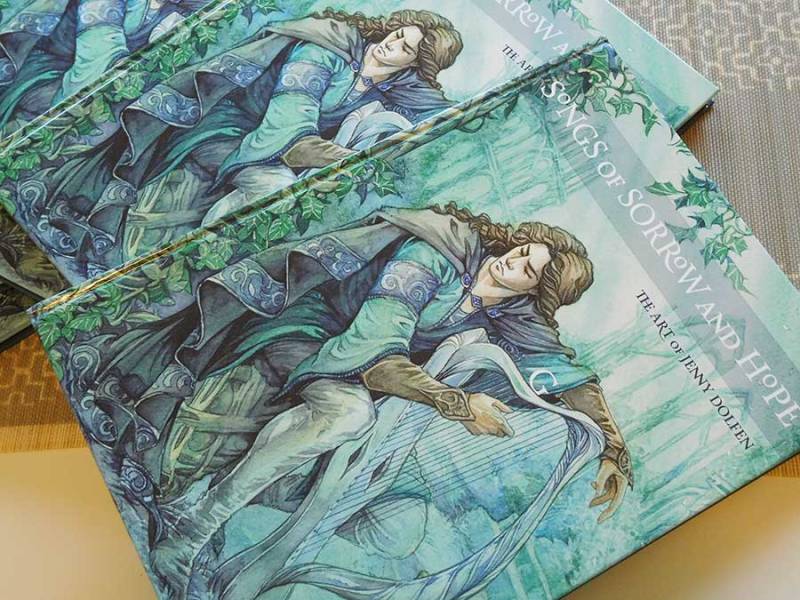 Oloris hadn’t caught it, I’d managed to miss it, and my printing company must have thought it was deliberate. They even phoned me about the cut-off signature, but they missed the G. Hubby – unhelpfully and hilariously – immediately said Maglor was clearly playing in G major. The string association doesn’t help either.

I went straight to Moo and had 100 little stickers made with exactly that image section, so I’ll have something to cover up Maglor’s G-string, which is definitely something I have wanted to say for all my life. They won’t be here until November, so anyone buying before that will get a different little sticker that they can stick over it (or keep it for other mistakes, like a typo in a cover letter or something) plus a few postcards.

I’m slightly frustrated at this point (slight understatement) and while I still think that the book looks gorgeous and the hardcover is a real looker, so much has gone wrong with this project that feel totally exhausted.

There’s one bright spot in my morning today: While I used the same printer I did for Cannae, they’re using different paper now – paper that you can sketch on with pencil!

If you want a sketch copy but haven’t preordered, you will need a bit of patience – it will take me a week or two to do the preorder sketch copies, but then yours will be shipped. :)

If you have read up to this point, I want to thank everyone who has been following the project since its beginnings (a long time ago) for sticking with me so patiently. You deserved better. But I hope that now, at long last and generously overlooking an intrusive G, you will love the final product when you hold it in your hands.