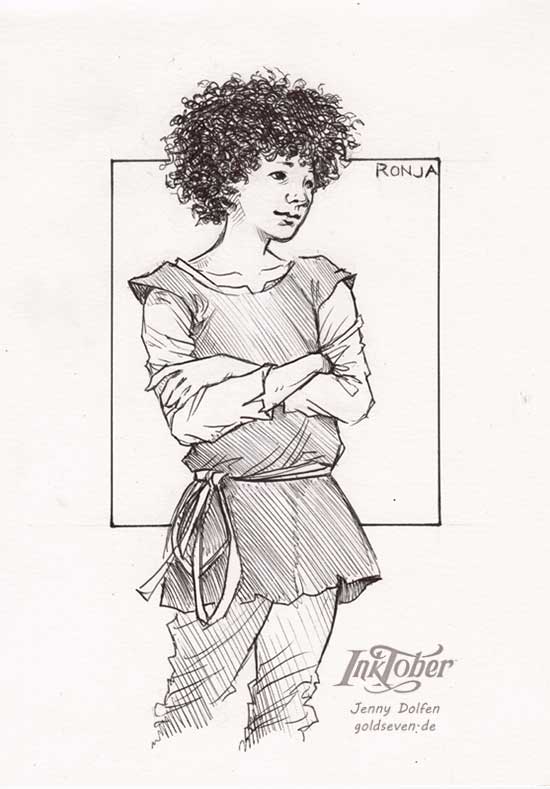 I’ve still got some ten characters on my list and am down to drawing straws – but I couldn’t really leave out Ronja.

Ronja was my first female heroine. As I already said on my “Alanna” piece, all of my literary heroes until then had been boys – most of the girls in books simply weren’t anything I felt was worth emulating. Ronja was different. With Ronja, once again, it was totally inconsequential whether she was male or female. When she is born, she is automatically assumed to be the next robbers captain, regardless of gender. When she meets Birk, neither of their genders ever matter – if anything, they are reversed, as Ronja has the traditionally male impulsive role and Birk is the gentle one, but again, without any overt shift in cliché – they are simply people.

When I was a child, I had a lot of difficulty finding out who or what I was. There were long stretches of time when I wanted to be a boy, though I never really knew what good that would do. I had short hair until I was thirty, dressed in jeans, grey sweaters and trainers, and was mistaken for a boy until I was in my early twenties. At some point, after picking up ancient warfare and football as hobbies, I simply stopped thinking of myself as anything other than Jenny. Jenny could encompass anything from unicorns to shouting at the football stadium, and saw absolutely no problem drawing Hannibal while listening to the “Last Unicorn” soundtrack. And when I slowly gravitated towards a greater degree of femininity, Jenny could encompass that as well. Ronja was one of the best role models in that regard throughout my childhood.

I owe another thing to that book (as well as other Astrid Lindgren books): The wonderful, wonderful illustrations by Ilon Wikland. She influenced my taste and my style strongly, to this day. “Ronja” is, to me, her absolute masterpiece. I adore the way she captures complex features, gestures and emotions in such simple strokes of her pen, creating entire worlds just in black and white.