Then Fingon rode against him

“Again after a hundred years Glaurung, the first of the Urulóki, the fire-drakes of the North, issued from Angband’s gates by night. He was yet young and scarce half-grown, for long and slow is the life of the dragons, but the Elves fled before him to Ered Wethrin and Dorthonion in dismay; and he defiled the fields of Ard-galen. Then Fingon prince of Hithlum rode against him with archers on horseback, and hemmed him round with a ring of swift riders; and Glaurung could not endure their darts, being not yet come to his full armoury, and he fled back to Angband, and came not forth again for many years. Fingon won great praise, and the Noldor rejoiced; for few foresaw the full meaning and threat of this new thing.”

Watercolour and gouache on Bockingford cold-pressed paper, 29×39 cm. See my shop for prints! Original is sold. :)

Huge thanks to Erin Jardine (@eyesoferin) and Freja Trulsdotter (@artofliberty) for permission to use their mounted archery photos as reference for Fingon’s archers!

People have often asked me why I’ve never drawn Smaug. I think part of the reason is that he’s so iconic that legions of talented people have drawn him, and I’ve never felt the need. But when the thought arose to do a painting that heavily relied on gold leaf, he came to mind immediately.

“Smaug lay, with wings folded like an immeasurable bat, turned partly on one side, so that the hobbit could see his underparts and his long pale belly crusted with gems and fragments of gold from his long lying on his costly bed.”

I’m pretty happy with how Ancalagon turned out here. Here’s how I did him:

For his look, I browsed the web for good closeups of… lizards. There’s an awful lot of great lizards out there – horned lizard, dragon lizard, and armadillo lizard were just a few I looked at in order to make the scales look good. The scales were really my main aim with this one. Lizard (and dragon) scales are really tiny in areas where mobility is needed (like the shoulder), and larger where they have to protect. Together, that made for a great irregular and interesting look. The wings were inspired by Pterosaurs.

Here are the painting steps:

First, a sickly yellow wash for a sickly light in the background. I used a mix of bright yellows, Sepia and a bit of blue for that. This reduced one compartment of my water box to a very sickly yellow brew, which will come in handy later on. 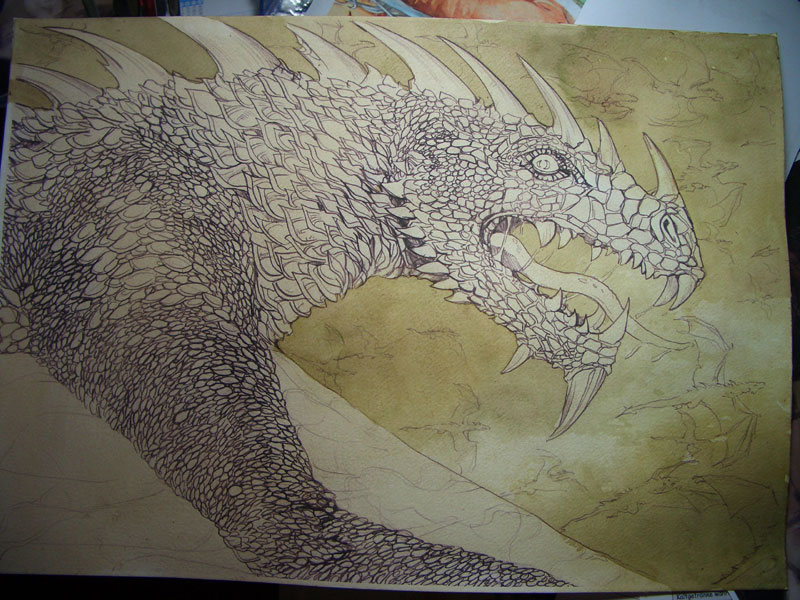 Darkening the wash in places, and working out a brighter portion of sky to his left. 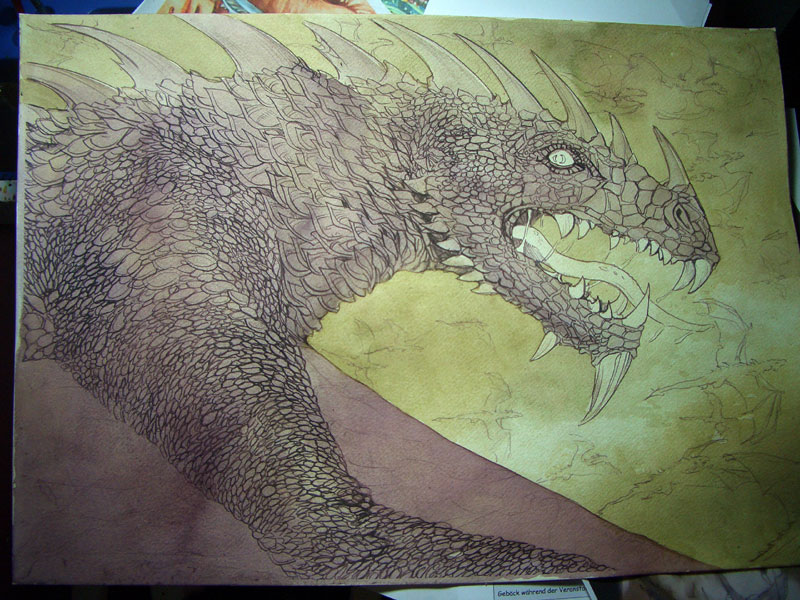 With Sepia, Alizarin Crimson and Ultramarine Blue, I created a purplish base colour for Ancalagon. The mix was still far too clean. So what I did was to use it together with my dirty yellow water; more in some places,  less in others. The mix of complementary colours – yellow and purple – made for some very natural-looking subtle hue variation in the overall dragon body. 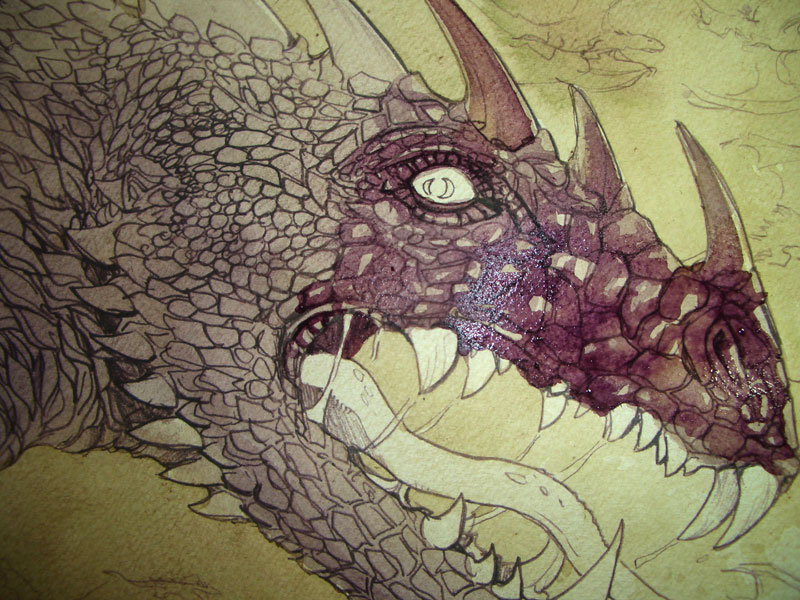 Then I started to detail his face, adding a first darker layer of paint. I left standing some of the lighter purple layer underneath, and was careful not to paint the scales too uniformly. Leaving a white edge on all of them in the same place would have become pillow shading.

Again, some hue variation for more vividness in the colours. In my palette, I had my purple paint next to a more brownish blob of paint, and I frequently dipped the brush into the more brownish too. 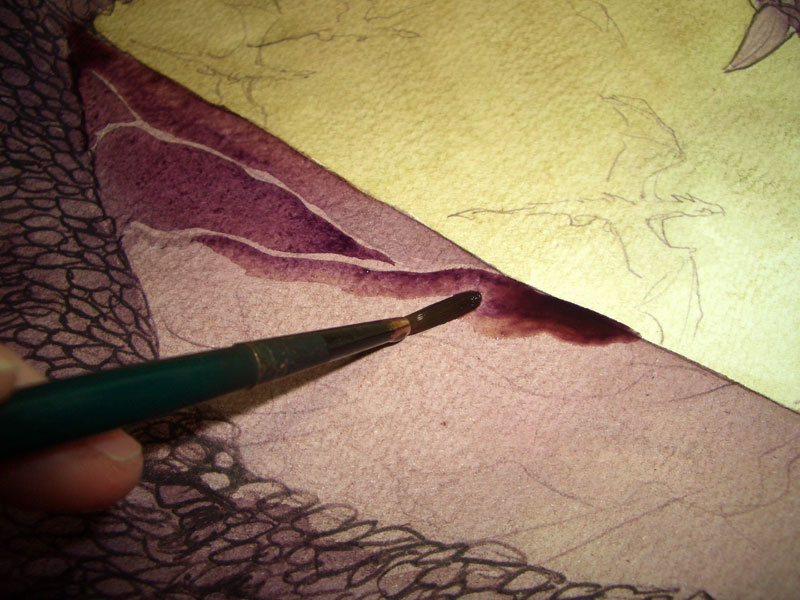 Painting around the veins in his wings. To make them stand out less, I later put another, darker glaze on top of the wings – the liquid watercolours leave very pronounced edges standing if you go over them again with another glaze, which I used to my advantage here.

A third, even darker, layer for the face and other selected areas of scales. 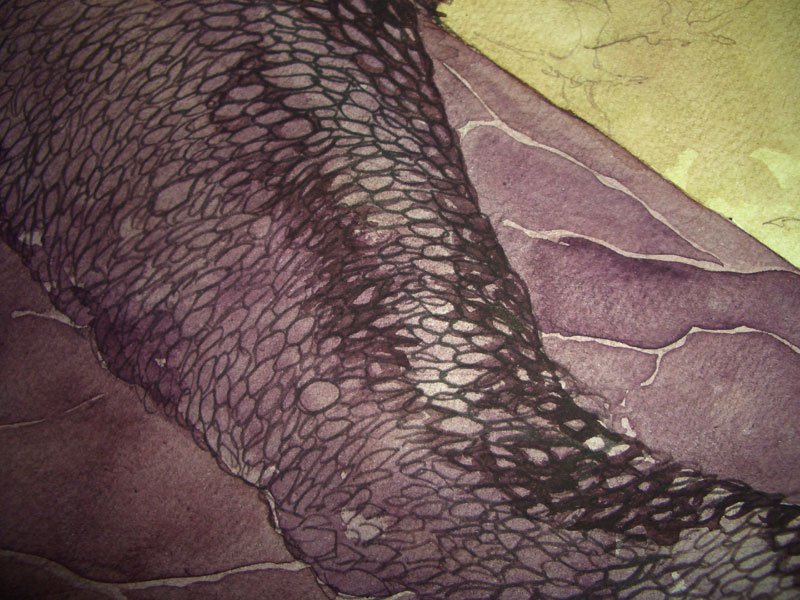 On the “arm” (in the wing), I left some highlights standing to suggest muscles.

New Tolkien art on the workbench

Yes! Jenny is about to acknowledge that the Silmarillion has more than Noldor!

One long overdue pic of Beren and Lúthien. The last Beren I did dates back to… 1993? and had mushroom hair. Don’t make me dig out pics. 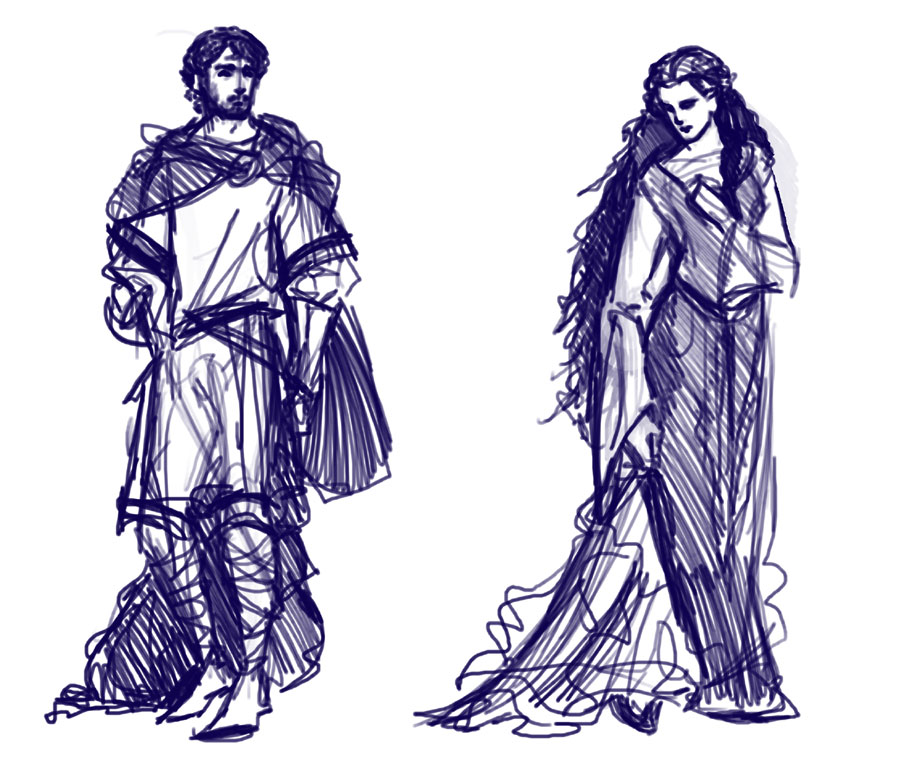 And I liked the little sketchy Ancalagon the Black I scribbled on the class trip enough to blow him up to painting proportions. Flying at the head of a winged dragon army. 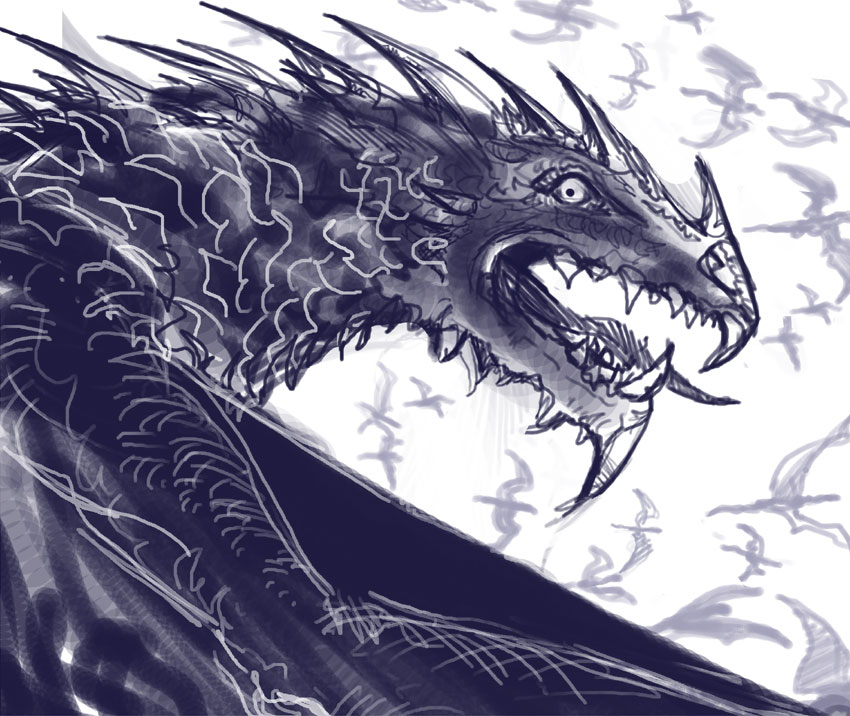 Another one I want to do before the Return of the Ring event is Eärendil with Elwing, possibly as split screen with Elrond and Elros plus Maedhros and Maglor.

If we make that an acronym, it’d be Meemee. 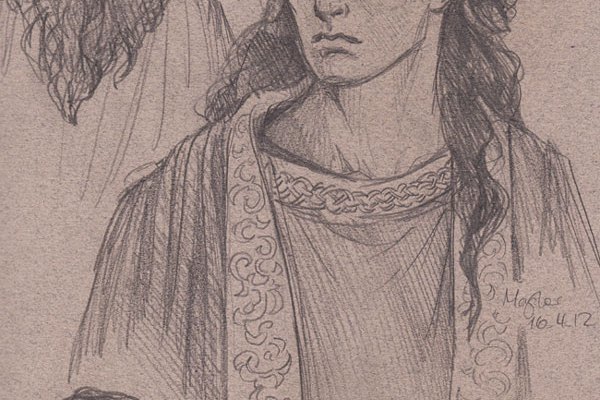 Sketches from the edge

A few absolutely incredibly taxing days. Class trip with one hundred twenty-six twelve-year-olds. Three days of sitting a bag of fleas, as we say in German. Some very touching experiences, some rather disheartening ones, and having to be “on” for seventy-six hours on end.

Drawing was a lifeline to sanity.